One of the most important steps prior to starting Hemodialysis is preparing a vascular access, which refers to a particular site on the body from which the blood could be removed and returned. A vascular access is often prepared several weeks or months before the Hemodialysis commences. A prominent advantage of vascular access is that it enables easier and efficient removal and replacement of blood, and that too, with minimal complications. A standard Hemodialysis treatment involves the continual processing of around 200-500 ml of blood per minute over a 2-6 hour period, and is usually performed 2 or 3 times per week.

This process should always be prepared weeks or months prior to dialysis. This prompt preparation facilitates efficient removal and replacement of the blood with fewer risks or complications. A properly functioning vascular access should have these characteristics:

The three important types of vascular access for Hemodialysis are – an Arteriovenous (AV) fistula, an AV graft, and a Venous catheter.

An Arteriovenous fistula (AV) fistula is greatly useful as it increases the strength of the vein and facilitates easy access to the blood system. It is regarded as the best long-term vascular access for Hemodialysis as it ensures sufficient blood flow, lasts for a longer period of time, and has fewer complications than other access types.

An AV fistula requires cautious advance planning as a fistula often takes some time after surgery to develop in certain cases, usually 4-6 weeks. It is created by connecting an artery directly to a vein, quite often in the forearm, to enhance the flow of blood into the vein. In due course, the vein grows larger and thicker, which in turn makes repeated needle insertions for the treatment easier. The surgery is performed using a local anaesthetic.

Once referred by your nephrologist for creation of AV fistula, you will be thoroughly assessed by our expert team and then a suitable site for fistula creation will be decided basis clinical findings and Doppler reports.

If there are small veins that won’t develop into a fistula, a vascular access that connects an artery to a vein is created with the help of a graft or a synthetic tube, implanted under the skin in your arm. This graft acts as an artificial vein that can be repeatedly used for the placement of needle and blood access during the process of Hemodialysis. A graft could be used soon after placement.

For patients who require Hemodialysis, a properly functioning vascular access is crucial for achieving optimal quality of life. If a suitable cephalic vein at the forearm and upper arm cannot be found, an arteriovenous fistula (AVF) is made using a prosthetic graft or a transposed basilic vein. The latter is completely protected from venipuncture owing to its deep position in the subfascial plane.

In Conventional Basilic vein transposition (BVT), a long incision is made over the medial aspect of the arm. The basilic vein is dissected up to the axillary vein and transposed into the subcutaneous tissue using multiple small incisions, followed by End to side basilic vein brachial artery anastmosis. 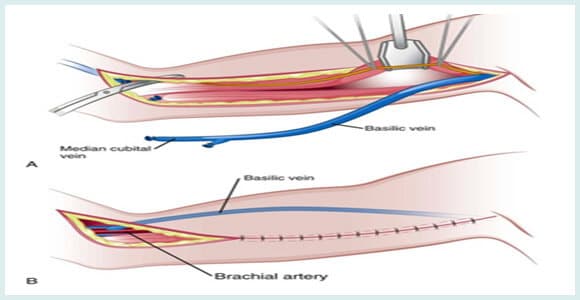 In this process, performed under local or regional anaesthesia, a transverse skin incision is made on the antecubital area to identify a basilic vein and brachial artery. Following this, three or four longitudinal skin incisions are made along the basilic vein, which is is then pulled out toward the axillary region. With the help of a tunneler, tunneling is performed under the skin and the full length of the basilic vein is transpositioned towards the lateral side of the upper arm. End to side basilic vein brachial artery anastmosis then conducted, with a small or minimal incision applied to basilic vein transposition to lessen the pain and make patients more comfortable.